Well, it’s been another couple of months since my previous post in May. I was successful in finding my grand uncle’s grave within ‘St. Michael’s Cemetery’ at SW-14-29-18-W1.

Unfortunately, the cemetery was overgrown and I don’t know how many other graves were suppose to be in there. Where I thought the graves would be located was just grass, unless the headstones have been buried, while the rest of the graves were found in the trees/brush.

There were a handful of other headstones that I was able to take pictures of but I was unable to get all sides. 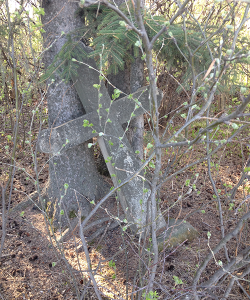 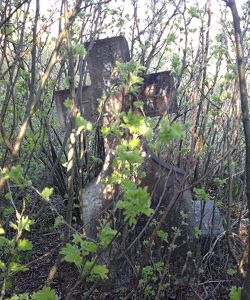 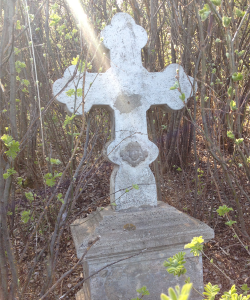 A surprising find was the grave of Peter Demczyszyn (1909-1930) who was murdered in a case of mistaken identity. You can read more in the previous blog post here.

Another interesting find was this mysterious grave at the crossroads of Road 170 North and Road 105 West.

This is what I have been able to decipher from the headstone.

From what I can understand it is related to the Chornoboy family, specifically, Anna Chornoboy (1904-). If this is correct then Anna was only 17 years old when she died. Historically, burial at a crossroads was the method for persons who have committed suicide. Was this the case for poor Anna? I am going to do some more investigation in this case.