For this week in Amy Johnson Crow’s genealogist challenge: 52 Ancestors in 52 Weeks, I would like to present a 71-year-old family mystery that has yet to be solved.

Throughout my genealogical research one of the topics that I’ve enjoy the most is learning about family members who have served in war. This is especially true for two of my direct Johnston relatives, consequently, both named William.

William Henderson Johnston was the brother of my great-grandfather, James Washington Johnston. He was born 18 May 1890, in Black River, Michigan and died ‘in action’ just outside of Arras, France on 29 Mar 1917. While not mentioned by name, based on the 31st Alberta Battalion war diary for that day, I’ve concluded that he might have been killed by artillery fire.

Two other ranks are unaccounted for, but I think that it is established that they were struck by a shell when crossing “NO MAN’S LAND” escorting three prisoners. Major Seaton states that he saw a shell strike in the middle of a party that he took to be three prisoners and two of our men, and two others bear witness to having seen such a party. (31st (Alberta) Battalion Order No.138. – 29-3-17.)

I digress, William Henderson is not the subject of this post, that honour belongs to his nephew, my grandfather’s brother, William G.W. Johnston. I wanted to give some brief history of William’s uncle for a note further below.

William George Washington Johnston was born 10 Jun 1917, to parents James Washington Johnston (1876-1967) and Sophia Harriett Basham (1890-1959). A brother to my grandfather, James Henderson Johnston (1913-1981), he was my great uncle, and like many of my relatives he was one that I will never get to meet in this lifetime. 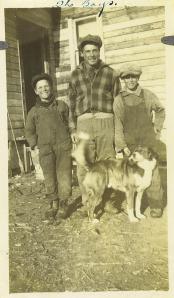 Like his siblings, he attended, Mowat School where he completed seven and a half years of classes and can be found in the school records from 1924 to 1931. In the image below, the 1929 Mowat December Attendance Record, you can see that Bill is 12 years old and in Grade 6 while his older brothers are in Grade 7 and Grade 9. 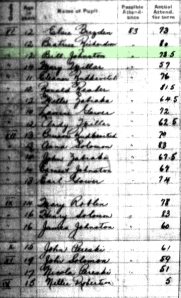 My great aunt wrote a bit about her step-brother, “Brother Bill was a born farmer. But World War II was just around the corner and life changed for all of us.” The two photos below are some of my favourites; I love the poses and the clothing they’re wearing. I wish I had a better copy of the tractor photo. 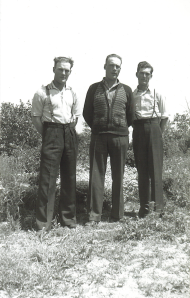 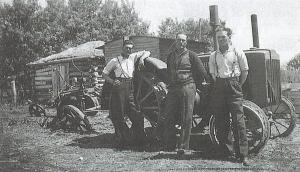 On 15 June, 1942, Bill was called up to the Canadian Military in Winnipeg, MB. On the occupational history form he listed his occupation as a farm labourer and he wished to return to this type of work when the war was over. He completed 60 days of basic training as well as 60 days of advanced training with the Winnipeg Light Infantry.

On 11 January, 1943, he was interviewed in W.L.I. Vernon, B.C. The interviewer noted a few interesting things about Bill, “Doesn’t smoke and drinks very little. He would like to be in the heavy artillery because he thinks he’d like it. Dull type, average physique, and not particularly interested in anything. Limited learning ability and no particular liking for Carrier Pl. Unlikely to improve greatly.” He was recommended as either an infantry rifleman or a carrier pl. (Bren Gunner).

Bill was admitted to the Vernon Military Hospital on 11 July, 1942, and was discharged on the 31st. He was then granted sick furlough from 1st of August to the 22nd. His sick leave was extended to 5 September and he returned on the 4th of September.

Bill never made it to any battlefields. The record of military service indicates that he was listed as being A.W.L. at 2200 hours of 27 February, 1944. He was never seen alive again.

“Sadly, with special grief to Jim and our mother, Bill had died while in the army…Bill of the blue, blue eyes and the kind and honest heart.”

On 10 February, 1945, Bill’s body was found in brush outside of Chiliwack, B.C. The causality notification form indicated that the presumed date of death was the day he went missing on 27 February, 1944. A letter was sent from G.S. Perrin, Brigadier, of the Department of National Defence Army, to my great grandmother, Sophia Johnston, that indicated the body of her son had no evidence of bone fractures and because of the advanced state of decomposition the coroner was unable to record the actual cause of the death. 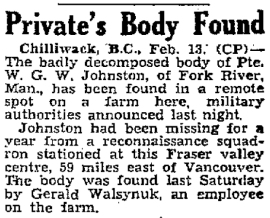 Bill’s body was discovered wholly by accident when an 18-year-old boy, Gerald Walsynuk, found it in a remote spot of Oscar Hotchkiss’ Farm near Lickman Road. The body was found lying behind a log, under some cedar trees, near a stream of water. The body was fully dressed in battle dress including black coveralls and a black tam on the head.

The British Colombia Police report sent along with military records from LAC is able to fill in a few questions. Lieut. Chet Woods, who was attached to the 41st. Alberta reconnaissance Regiment, Vedder Crossing, B.C., while talking to a Miss A. Flynn, informed her that a private of that unit had gone insane and wandered away from the camp and that they had searched for the man but without success. If the above is true then it is possible that William G.W. Johnston is the man in question. Capt. Mooney was there that night and might be able to shed some light on the matter.

This is where the report ends abruptly. I do not know whether the police were able to get a hold of Capt. Mooney or whether they were able to conclude the report. I contacted the Chilliwack RCMP office but to no avail as their records only go as far back as 1971 and anyone who might have known if there were earlier records have either died or retired. The Chilliwack Archives were able to provide me with a few newspaper articles but they also do not provide a conclusive answer. My next step is to contact Canada National Defence to determine whether they have an archives department that might hold something. I also want to contact the Canadian Military Education Centre Museum to see if they have any ideas on where I should turn next, however, their hours of operation are limited and I have not had the time to contact them.

I have no idea what happened to my grandfather’s brother and I don’t know if I ever will. Was the pressure of his post too much for him? Did he loose his mind and commit suicide or was he a victim of homicide? I wonder if a more conclusive answer would have been made if his body was found sooner. It seems like such a bizarre set of circumstances I really don’t know what to make of it. Based on my current knowledge of Johnston family we have no obvious history of mental illness. The closest instance I can think of is that Jane Atchison (1854-1893), William’s grandmother, died of asphyxiation during an epithetic fit. 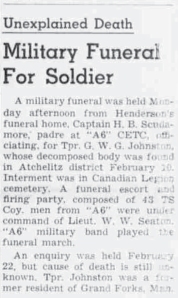 Bill was buried on 5 March, 1945, with full Military Honours in the Canadian Legion Cemetery in Chilliwack, B.C. Row C, plot 57. He is one of 9 individuals buried there. After the death of William George Washington there was some superstitious feelings on naming any further Johnston babies William in case further tragedy might befall the family again. Consequently I have no uncles, cousins, or nephews named William.